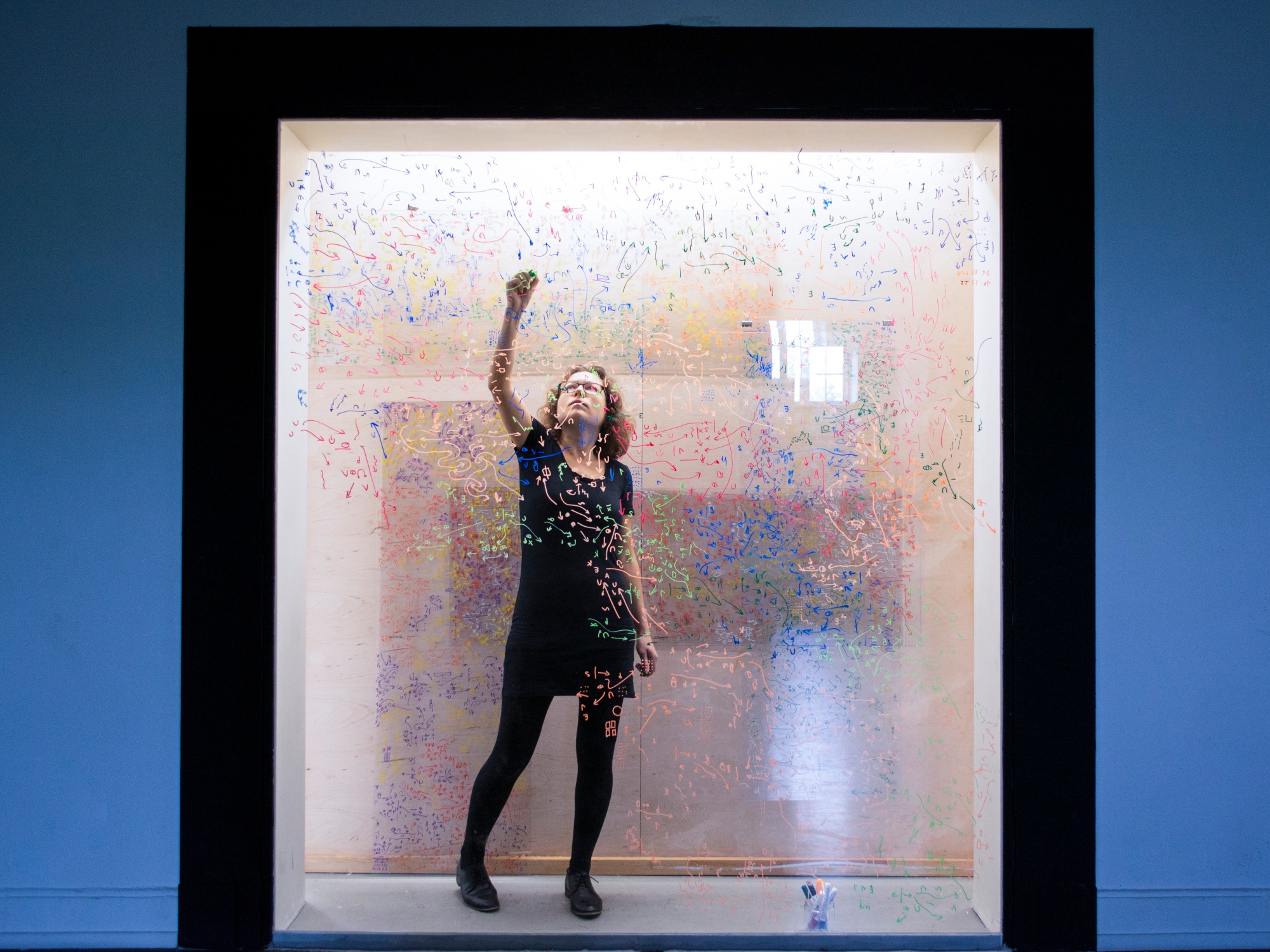 In fact, long time, no studio visits, no visits to exhibitions and museums, no openings, no live audiences, no networking, no socializing, no partying, no nothing…

Beginning of 2020, when I posted about my last encounter with MAI LING, who I visited in person in their studio, the world was still, well…ok. Yes, racist, misogynist, homophobic, the climate was wreaking havoc around the world, refugees in Moria and elsewhere treated horribly, alternative facts and fake news were becoming a real thing, QAnon was already conspiring, right-wing politicians undermining democracies, etc. Life was “normal” in a nutshell. I’m not going to summarize my pandemic year, as it mostly probably looked like anyone elses, including all of the human cravings, Fernwehs, desires, heartaches, deprivations, and what else one develops when confined to four walls… I’d rather talk about art!

The Internet turned out to be the most vital thing during a pandemic in order to stay connected and, quite frankly, stay alive! Our entire worlds suddenly transformed online, bringing about some challenging and also unnerving new features, which I’ll expound on in this text. On the exciting side, art and exhibitions were exclusively available online and any kind of interaction we usually had IRL was happening in front of a screen. On the more alarming side, mass data was collected in unprecedented ways.

With little outlook to what was going to happen, a team of curators and I started KARA AGORA—an online art and research center, for which I created my first online exhibition on Mozilla Hubs called Net Works – Pitch for a Social Network Sphere. Needless to say, it was an entirely new experience. I’m not going deeper into the show (it’s still online), but am mentioning it, as I invited Darja Shatalova to produce something exclusively for the show. It turned into a central piece of the whole exhibition, tackling several issues that I have been engaged with for several years and that have eventually become ever more pressing during the pandemic. So I met with Darja on Skype to talk about her approach to art making and how she includes the fast-paced developments in data tracking and popular Apps and devices.

Darja was born in Russia, she studied Arts and Mathematics on Magisterium at the University of Cologne, and in 2014 came to Vienna to study at the University of Applied Arts in the Transmedia Arts class, which is a studies program that encourages to explore many different media, which has—next to her background in mathematics—clearly had an impact on Darja. Her working process is as structured as the work itself, starting from observations of socio-political and personal events, which she notes down in artist’s books in the shape of graphics or maps and become the starting point for the forthcoming works. The collected data is then transformed into video works, sound compositions, durational performances, or site-specific installations. In a way, she does infographics or data design on a whole new level: Visualizing information, statistics, and data in a coded and mathematical language thus lies at the base of her entire body of work.

These long-time endurance pieces, ranging from nine to fourteen hours, aim at showing that our construct of time can be thought in a non-linear way. We usually perceive time in a chronological order, so I created a system to express time in a three-dimensional shape. The long-term performance “Die Verzeichnung der Zeit” was meant to question our concept of time by setting up an alternative time recording system. In fact, it took me fourteen hours to notate twenty-four hours, so there is a discrepancy between the time I use for notating data and the real time. The whole process of collecting data, (re-)notating and (re-)structuring, transforming it into other media, is a highly protracted procedure, which is also reflected in the pieces themselves, Darja tells me.

What I find interesting in Darja’s work is how the body plays a part in all of them. Not only the physical body itself that is often the medium for the works, but also the issue of our bodily functions, or biometrics, which are getting tracked, surveilled, coded, and used for various purposes. Needless to say, since the pandemic started, the amount of data retrieved by corporations (e.g. Facebook, Google, Apple, etc.) and governments just increased immensely in scale and many make huge amounts of profit from the crises (e.g. Amazon). In The Age of Surveillance Capitalism Shoshana Zuboff writes: “The rendition of your body begins quite simply with your phone. … For all of the elaborate ways in which surveillance capitalists labor to render reality as behavior for surplus, the simplest and most profound is their ability to know exactly where your are all the time. Your body is reimagined as a behaving object to be tracked and calculated for indexing and search.” (Zuboff, 2019: 241)

As I’m interested in big data and how it gets used to influence our behavior through algorithms, it is intriguing to see how Darja visualizes data, like in “Disjunkte Mengen” from 2020. It deals with the pandemic-related phenomenon of “social distancing” and newly developed tracking Apps that were supposed to curb the virus, but in reality, collect massive amounts of user data. Google Maps has already sold us the convenience of collecting our mobile data to predict crowds but these “virus tracking apps” were analyzing people’s behavior and mobility on a whole new level.

In the performance in public space me and two other performers were wearing colored circles according to the RGB color circle—reminding in their shape of the Google Maps location icon. The piece is dealing with the discrepancy between unity and solitude. During the performance our route could be tracked live on Google Maps, questioning the collection of mobile phone providers who give away data about people’s mobility to the government. Back in May 2020, these tracking methods caused quite a stir, one year later it’s the new normal.

This “new normal” stance was something we were constantly hearing at the beginning of the pandemic. It was “normal” all of a sudden to stay and work from home, to not meet anyone, to keep a physical distance of two meters, to wear masks, etc. etc. AND to get tracked by public authorities and high-tech companies in the name of safety. In an article, Naomi Klein calls this developing phenomenon the “Screen New Deal” or more poignantly “A High-Tech Coronavirus Dystopia.” Hence, it is no surprise that artists are dealing with the various nuances of this “new normalcy” that the pandemic triggered in 2020—and we are still getting used to new new normals in 2021!

For Darja, it was not so much the data collection and the tracking and tracing of people that was new, though: For years, I’ve been working with the collection and transformation of data but since the pandemic started, this topic took on a whole new level of relevance. Especially the issue of surveillance and privacy policy became so current in the past year, so I created a couple of works as a reaction to these developments. Tracking capabilities are omnipresent in our everyday lives. There’s tracking for everything from where you go, what you do and buy, how much money you spend on what, there is thousands of data of each and every one of us on some databases. In the past, this monitoring was rather imposed on people, who found themselves more and more in a system, in which they could be constantly watched. Nowadays, we are increasingly willing to give away our information deliberately.

This last point of people wanting to be tracked, giving away every aspect of their lives, saving all the little details that make up our character made me think. I’ve always been frightened about the fact that everything we do online leaves a trace, that data is worth more than gold nowadays, and that algorithms know our future desires better than we know them ourselves. The exhibition series Search for… is exactly coming from this concern and I’ve tried to look critically at this contemporary phenomenon of predicting our behavior with the help of data and algorithms in these shows. I have been engaged in many debates—public and private—about the fact that our lives get increasingly datafied as a business. This tendency of deliberately sharing data for personal gain is something that has not been on my radar, yet it is a striking testimony of our time: We are starting a new age. I’m critical about this trend, but I’d rather want to reveal these developments from a neutral position so that the viewer can judge for themselves. We are in the middle of this process of restructuring and there is no way back.

There’s no going back!

For the Net Works exhibition, Darja created a work that particularly raises this hate/love relationship with big data: It was clear that in this work, I wanted to visualize data that was coherent to the current global situation, so I decided on health related data. We used a fitness wristband as a starting point, which collects data on all kinds of bodily functions, like blood pressure, heart rate, and the amount of steps taken.

I guess the people who use these devices are hoping to curb their health and body shapes, what they probably don’t have in mind is how much information they deliver—for free—to those companies that design the hard- and software. An article on ZDNet says that by 2023, “five million individuals will be remotely monitored by healthcare providers by 2023. Doctors will be able to use the data generated by wearables combined with AI-enabled software analytics to proactively identify individuals at risk.” Of course, I’m aware of advantages that personalized data can have in terms of preventing viruses or one’s health, but up to this day, I’m rather critical of mass data collection and what it is used for by companies and governments. The ability of websites to track people across the Internet and therefore knowing exactly what adverts to pitch through data collected is troublesome. One case in point is the following add that was attached to an Email I received while writing this text…

From the macro to the micro.

Darja’s works are poignant comments on the larger societal problems of neoliberalism that is ingrained in us and constantly urges humans to get better, sell more, and progress to perfection. They are observations of her personal space and the world that influences her. Her artist books, graphic notations, time-based installations, and public performances beautifully represent all of these macro and micro levels of life.