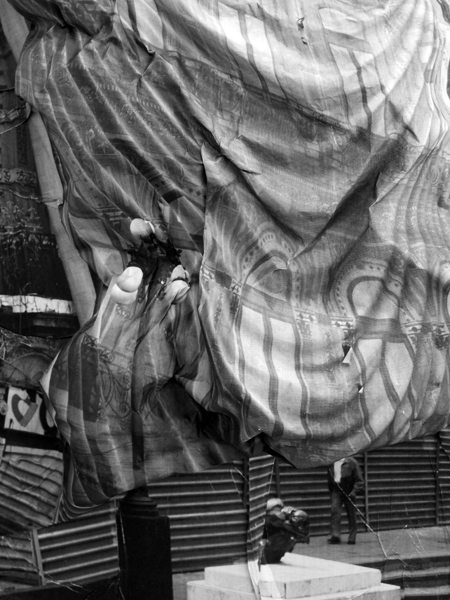 Being an hour late for my visit to Diana Artus’ home and studio, I tried to make it up by bringing some fresh fruit. So, while I did my best in cutting up the papaya (should have brought chocolate though!) we were talking about Diana’s career path as an artist, which started with a degree in German linguistics. After a trip to Paris, where she was wandering the streets like a flâneur in the 19th century, shooting whatever came in front of her camera, freezing urban banalities, fugitive moments andordinary phenomenon, coincidence led her into photography. “I was always interested in literature, and it was the time when I was reading Franz Hessel’s books on the flâneur in Berlin, when I realized I was actually doing the same, strolling the streets of Paris. I took out my small cam and just started shooting whatever appeared in front of me. I was never that much into photography before, but I just started to snap some shots out of fun and without any ulterior motives.”

However, convinced by her friends that she had talent, Diana applied at the university in Leipzig, got accepted, studied Photography and Media Art and graduated in 2010. Finally, February 2013, Diana and I were sitting in her studio reminiscing about her large body of works that already consists of numerous series of photographs, of which the image stays the same, its materiality is altered consistently, however. Thus, the picture is only the starting point of her works, like in her “Psychobuildings” series, where she prints out the image on normal paper, wrinkles, draws over, squashes and pastes it and repeats these processes until the point of perfection is reached, creating black and white paperworks representing deconstructed facades that are melting down or aging like wrinkled skin.

„My interest is focused on the condition of imagination and memory as well as on the structure of desire and its inherent contradictions. The discrepancy between expectation and fulfillment is a central point in my work. I am especially affected by places and situations characterized through absence, imperfection and  failure.

I am also very interested in photographic dissolution rather than resolution trying to dissolve the image into the supporting material, an increasing abstraction or an accentuation of its graphic elements. Resulting works refer not only to the urban sceneries we are crossing daily but also to their fundamental instability, fugacity and vagueness as well as to the reflections they give of  inner images and possibilities of the beholder.“

Another great series of Diana’s works is called “Scratchings”. They resemble views out of the subway that are always momentary, blurry and distorted. “The separation in two sides, in a ‚here’ and ‚there’, an inner and an outer world becomes obvious, the simultaneity of the desire for getting closer and the anxious need for keeping distance creates ambivalent sceneries of urban melancholy foiled by aggressive visual interferences.“

Two hours were gone and so the grapes (by me) but Diana was still enthusiastically presenting the ideas that she is spinning for future projects. Hence, it is obvious that I really enjoyed my stay at Diana’s. I am always intrigued by the dynamic spirit of young artists and their passion of persevering their ideas, which Diana is not only storing in her head, but moreover in her numerous cardboard boxes. In the same way as most of her previous works new projects will also be put together out of found footage, like pictures from the fleamarket, books and magazines, and the hundreds of momentary images she has been collecting over the past years.